Engagement with the UN 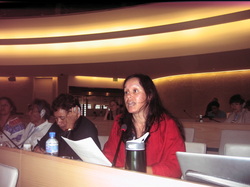 Tracey addressing the EMRIP July 2011
We have prioritized the monitoring of the New Zealand government's compliance with UN Treaties in particular the Covenant on Political and Civil Rights, the Covenant on Economic, Social and Cultural Rights and the Covenant of the Elimination of all forms of Racial Discrimination.